Photographing the Neowise comet was a once in a lifetime opportunity and I took a chance on a night that looked like nothing would happen and got lucky! We drove to the Bonneville Salt Flats on the Utah, Nevada border, set up and waited. It was worth the wait!

I have always loved gazing at the stars. As a child growing up in Cache Valley, Utah we would spend summer nights sleeping in the yard and fall a sleep watching the glory overhead. My love of the night sky never changed and now when the conditions are right I love photographing the heavens. This night July 17,2020 even though there were clouds in the sky and a fire burning near Wendover, Nevada we decided to head out to the Salt Flats and try our luck. Clouds and smoke hung in the air, the sunset was spectacular but I didn't think we had any chance of photographing comet Neowise. We walked in the dark out into the desert of crusted salt looking for a patch that wasn't tracked from vehicles. It was so bright we didn't need flashlights. My plan was to shoot the Milky Way because the clouds were too thick to the northwest. I had only taken a few shots when my wife exclaimed "There's the comet!" I quickly turned around and sure enough the clouds had parted just enough to see it trailing through the sky. I composed the image and started shooting. What an amazing experience!

This photograph was taken at 11:20 p.m and is a single 15-second exposure shot at ISO 6400 and f/2.8 with my Nikkor 28-70 lens zoomed into 42mm. I love the clouds in this image, which help give it depth and character as well as the purple glow from the setting sun, the crusted salt flats extending into the distance, the shadowed mountains and comet glowing overhead. This is exactly what I was hoping to get and this night the photography gods smiled down on me.

NEOWISE is known for being the brightest comet in the northern hemisphere since Comet Hale–Bopp in 1997.[4] It was widely photographed by professional and amateur observers and was even spotted by people living near city centers and areas with light pollution.[5] While it was too close to the Sun to be observed at perihelion, it emerged from perihelion around magnitude 0.5 to 1, making it bright enough to be visible to the naked eye.[6] Under dark skies, it could be seen with the naked eye[7] and remained visible to the naked eye throughout July 2020.[8] By July 30, the comet was about magnitude 5,[9] when binoculars were required near urban areas to locate the comet.

For observers in the northern hemisphere, the comet could be seen on the northwestern horizon, below the Plough or Big Dipper. North of 45 degrees north, the comet was visible all night in mid-July 2020. On July 30, Comet NEOWISE entered the constellation of Coma Berenices, below the bright star Arcturus. 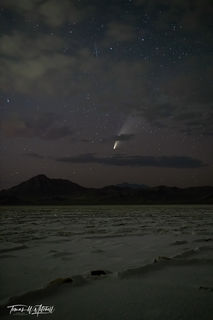